Indulge in the Ancient Egyptian wonders on a 9 day exploration trip across the country with a touch of luxury.
Take the first few days in Cairo to visit the Great Giza Pyramids and Sphinx. Fly to Luxor where you’ll kickstart the second phase of your journey!
You’ll visit the famous artifacts of Luxor before heading to board an all-inclusive Nile Cruise ship sailing down to Aswan with guided trips to historic landmarks led by expert Egyptologists. 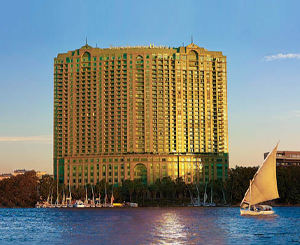 The Four Seasons at Nile Plaza is located on the Nile River and is a 10 min drive walk from the famous Cairo Museum. The hotel has a gym, salon, and indoor pool. While guest rooms have Nile and city view rooms.

Welcome to EGYPT!
Upon your arrival, our representative will be waiting to transport you to your luxury hotel, where you will be staying with an incredible view of the nile to make that morning coffee extra special!

You’ll be commencing your trip of exploration and leisure at the Giza Plateau, site of the Great Pyramids of Giza. Built in the Fourth Dynasty (approximately 2690 BC), the Pyramids are the only surviving Landmark of the Seven Wonders of the Ancient World. On this visit, you’ll be granted special treat with VIP access to the paws of the enigmatic monument.
At the evening, you’re invited to enjoy a welcome dinner with fellow guests as we all get to know each other!

Join your expert Egyptologist for a day of exploration at the Egyptian Museum of Antiquities (known previously as the Grand Egyptian Museum) and marvel at the incredible collection of Ancient Egyptian Artifacts.
Afterwards, you’ll be having lunch at a local restaurant, from where you will then continue your journey by visiting the 14th century Sultan Hassan Mosque known for its grand Architecture meticulous design.

Arrive to Luxor, sight of the ancient City of Thebes by exclusive charter flight.
Upon arrival, you’ll be taken to enjoy lunch onboard Nile Concreto or similar boat. Marking the beginning of your Luxor trip is a visit to the Temple of Karnak, where you’ll get to walk through the Great Hypostyle Hall and witness its perfectly aligned columns ( the largest of which is 80 feet with a 33-foot circumference)!
Next, we’ll be moving to the temple of Luxor, located at the heart of the city. The northern section of the Temple nearly slightly overshadows the other section, as it was built by by Ramses II and depicts his likeness in a colossal statue.
At night, we enjoy canapés and dinner on board.

Spend the day exploring the west bank of the Nile and the Necropolis of Thebes, beginning with a photo stop at the Colossi of Memnon.
Continuing the journey, we’ll be visiting the majestic Temple of Hatshepsut, ancient Egypt’s first female pharaoh and regarded historically as one of the most successful heirs to the throne.
The tour continues as we move to the Valley of the Queens, where we’ll be granted access to Queen Nefertari’s Tomb, famously known for its well preserved colorful artworks that adorn its walls. Proceed to the nearby Valley of the Kings, burial ground of the pharaohs and a UNESCO World Heritage Site.
For a period of 500 years (beginning in the 16th century BC), tombs were built along this valley for pharaohs and nobles, including the tomb of the “boy king,” Tutankhamun. Unearthed in 1922 by British archaeologist and Egyptologist Howard Carter, the tomb of Tutankhamun is yours to explore, as you set foot inside its 35-century-old walls. Enter the lesser-visited tomb of Seti I, the father of Ramses II and one of the best-preserved tombs in the Valley of the Kings.
In the afternoon, your vessel begins its cruise upstream.

Continue your cruise to Aswan and proceed to unravel the beauties of the granite quarries and the site of the unfinished Obelisk.
Showcasing the skills of Egypt’s stonemasons.
The monolith is one-third taller than any other ancient Egyptian obelisk.
After our visit to the quarries, we’ll take a motorized boat ride to Philae Temple on the Island of Agilika. This sacred complex was dedicated to the goddess Isis and reflects a fusion of three great civilizations: Egyptian, Greek and Roman. The temple was dismantled and then painstakingly reassembled when the Aswan High Dam was constructed.
After a day of sightseeing, you can enjoy lunch on board, and later, Ride Like a Local around the Aswan islands in a felucca (traditional sailboat) and relax with the night breeze. Toast to your adventure this evening at a gourmet farewell dinner onboard.

On this day we bid farewell to our lovely hosts at NILE CONCERTO OR SIMILAR, and continue our adventure by flying to Abu Simbel. There, we discover the commanding twin temples of Ramses II and his wife, Queen Nefertari. The former’s façade is dominated by four statues of the pharaoh, each nearly 70 feet tall. Perhaps even more impressive, is the fact that this entire site was disassembled and moved here to save it from the flooding caused by the Aswan High Dam.
At night we return to Cairo to enjoy an evening of leisure!

Uncover more Egyptian mysteries by visiting Sakkara, home to
hundreds of tombs and 14 pyramids, including the Step Pyramid of Djoser. Get a chance to Admire beautiful tomb art, which yields rare insight into the lives of ancient Egyptians, and even enjoy exclusive special access to the recently discovered Wahtye’s Tomb, led by an expert from Egypt’s Ministry of Antiquities. Explore the tomb’s newly unearthed finds, which remained untouched for 4,400 years, as featured in the popular Netflix series Secrets of “the Saqara Tomb”. Later at night, you’ll be visiting the National Museum OF Egyptian Civilization, which is highlighted by its Gallery of Royal Mummies, followed by an evening of leisure.

Sadly, your trip has come to an end and you’ll be departing.
Our representative will transport you to the Cairo International Airport.

Sign up now for travel tips, personalized itineraries, and vacation inspiration straight to your inbox.